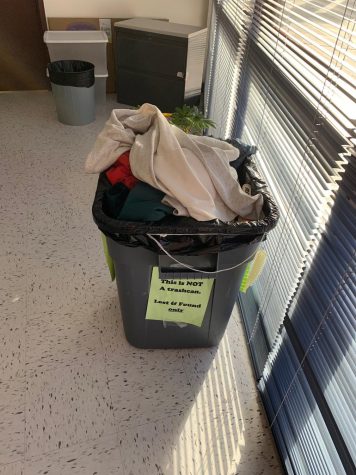 A student walks home after a hard day at school. Suddenly, they realize they forgot their jacket and
quickly rush back to get it from class, but when they arrive it’s gone. They go to the lost-n-found in hope
of retrieving the jacket, but they stop in their tracks at the sad state it’s in. It was a simple trashcan, filled
to the brim with unsorted shoes, coats, shirts, belts, hats and even singular socks, it was a mess.

When someone thinks of a lost-n-found, they usually imagine a place where lost belongings are kept safe
and stored so that the respective owners can eventually retrieve them. They don’t imagine a trashcan
where all manner of belongings are thrown together in an unorganized heap like garbage.

According to Weareteachers.com, many schools have rackets and labeled bins so that lost belongings can
be organized and kept separate from each other.

“I think they just don’t have a place to build one,” German teacher Juan Pinón said. “Every place in this
school has a purpose, so I think it’s hard for the school to make a lost-n-found because every place they
could potentially build one is already used for another function.”

Some students don’t seem to really mind or care about the lost-n-found’s current state, preferring to deal
with it rather than speak out and make changes.

“People shouldn’t lose their stuff,” sophomore Carlos Dominguez said. “If people take better care of their
stuff, then it won’t end up being lost and placed in a trashcan. It’s kinda like a deterrent because if people
see that it’s a trashcan, then they will be extra careful not to lose their belongings.”