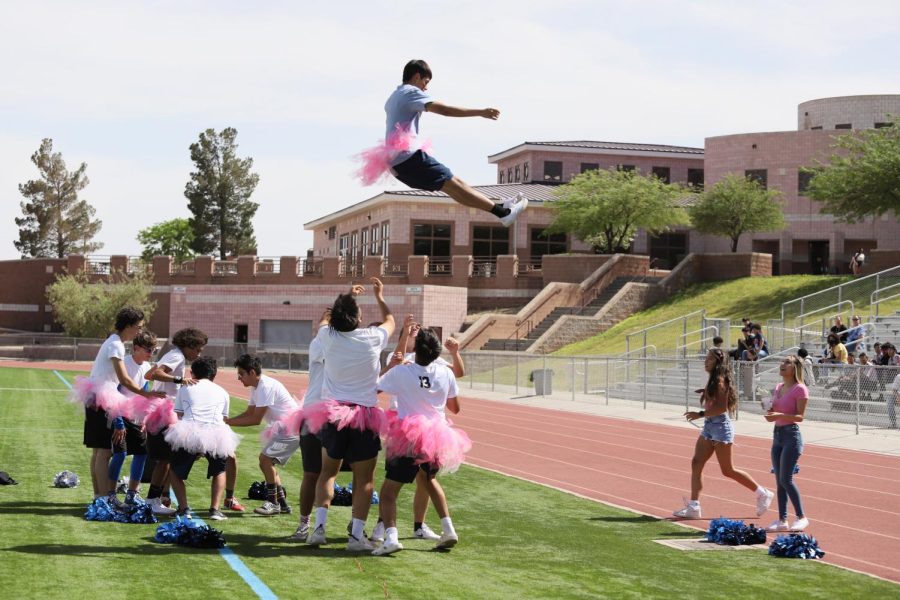 Cheerleader in the air as his fellow teammates throw him for the fourth time.

The boys wear the tutus and the girls throw footballs. On Wednesday May 4 the powderpuff game was held during the last hour of school. The game was girl juniors versus senior’s while male upperclassman cheer on the sidelines.

Powder puff is a high school tradition but has not been held in three years due to covid.

“I’ve never even heard of powderpuff before this and I never thought it was such a big event,” sophomore Victoria Perez said.

The game was held as a cheer fundraiser where they raised more than enough this year.

“We are using the money from the game to fund our cheer banquet at the end of the year,” sophomore Desert-Rain Martin said.

Many students purchased $2 tickets to attend and leave eighth period.

“The stairs down to the field were filled with students trying to get in to watch the game,” Victoria said.

The boys had to prepare for their cheerleading performance by practicing basket tosses and dance routines.

“We spent like three hours total on the field learning how to flip and stunt and we even learned one chant,” cheerleader John Green said.

They were not naturals at first, but practice with the varsity cheerleaders helped them become prepared.

“My favorite part was definitely practicing the stunts, you know we dropped them a couple times, but we eventually got him up there,” John Green said.

The girls on the flag football team had to get their practice in as well 4 times after school.

“Anthony from the football team has been coaching us at practice where we run through plays,” junior Isabela Arnold said.

Joining the team was a learning experience for some.

“I definitely loved learning more about football because before doing this I did not know anything about it,” Isabela Arnold said.

While others just enjoyed the fun spirit of the tradition.

“It’s really nice how we’re just having fun with it like we would cheer each other on during practice, it’s honestly just a good time,” senior Daila Davis said.

The game ended with the juniors taking the win.

“The juniors haven’t won a powderpuff game since 2018 so we are really excited to have changed that,” Isabela Arnold said.